How I streamlined my newsletter workflow with AWeber Curate

IMPORTANT Update, 22 August 2016: For the last two issues of The Week in Writing For SEO, I’ve hit serious problems which have delayed the newsletter. They seem to be caused by the HTML generated by Curate because the test e-mail doesn’t work properly in some e-mail clients/web browsers. I’ve reported the problems to AWeber and hope they come up with a solution. In the meantime, has anyone else hit problems recently? Please leave an outline of your experiences in the comments below.

Finally, until I’ve found a solution, I advise you to not try the workflow in this post.

I hope you subscribe to my newsletter, The Week in Writing For SEO. If you have, you may have noticed that I use the popular e-mail marketing service from AWeber. A few months back they launched a nifty iOS and Android application called Curate for making newsletter production a no-brainer.

After a bit of eyeing each other up from opposite sides of the dance floor, and a couple of uncomfortable dates, we’ve decided to get together and make a go of it. This is why (and how):

Imagine being able to create and send a newsletter on your phone, during your morning commute. In a nutshell, that’s what the Curate app enables you to do. 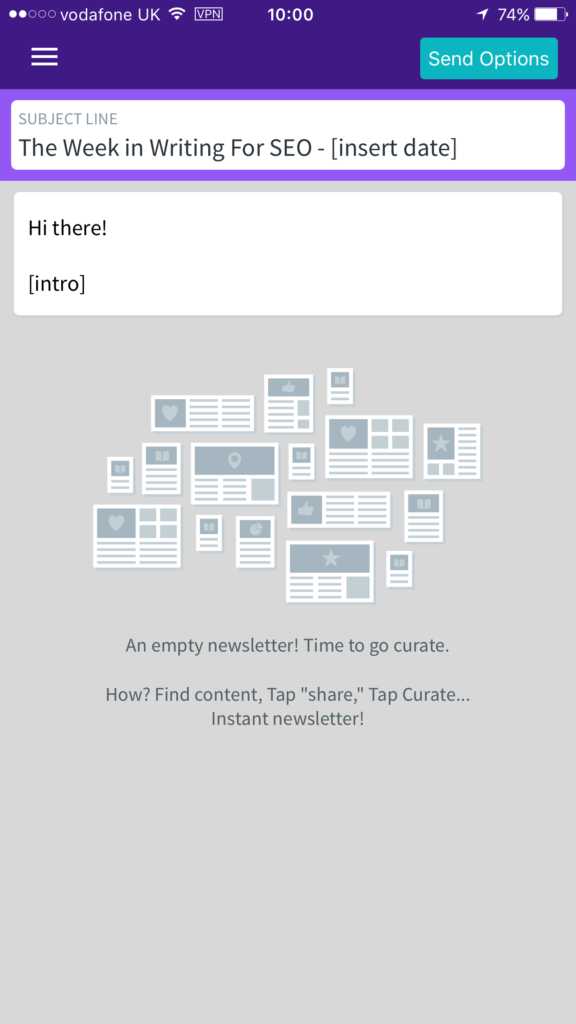 Here’s how you start. With an empty newsletter in the Curate app 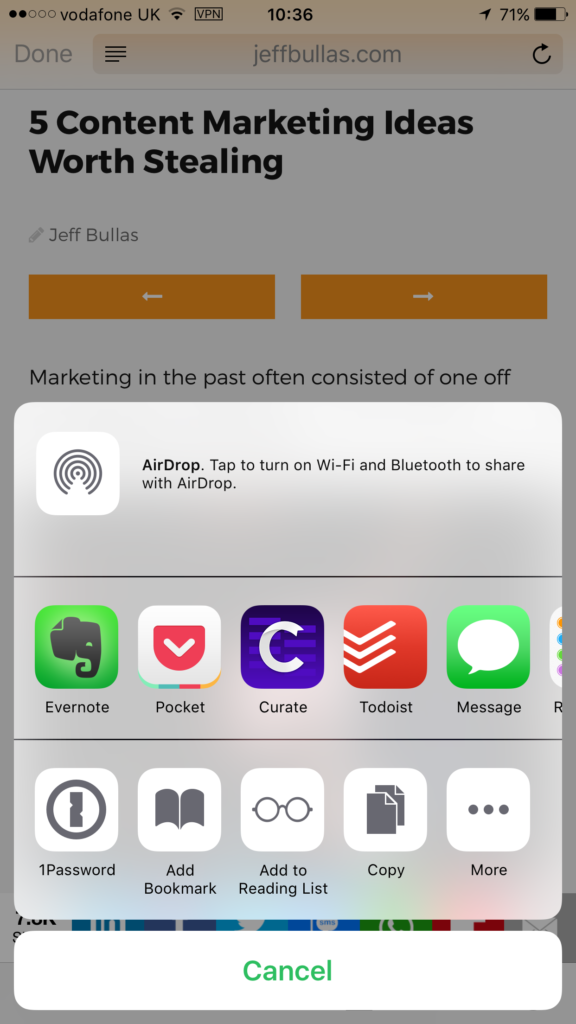 Adding an article to AWeber Curate 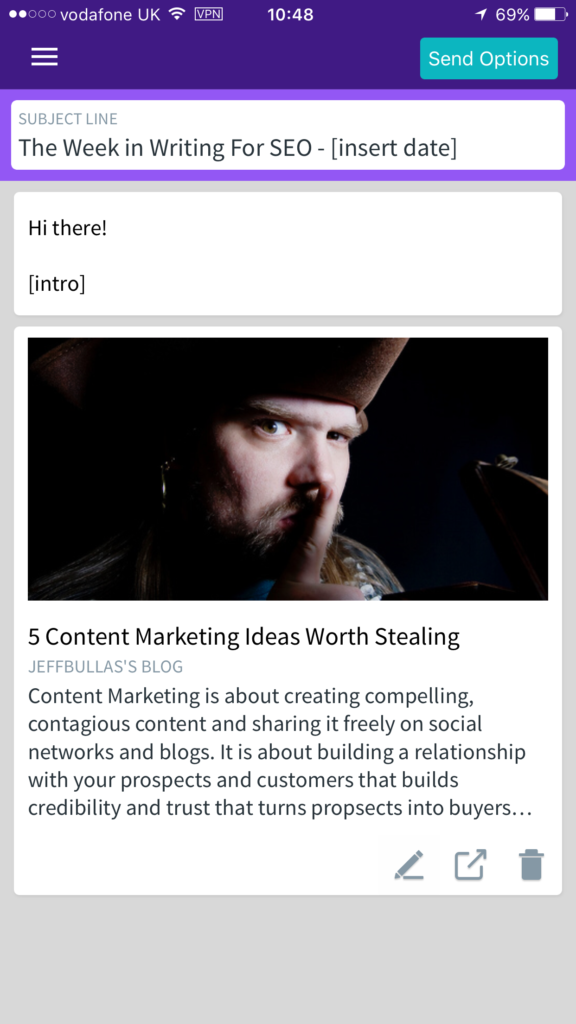 And you can preview by Tapping the Send Options button and then Preview. 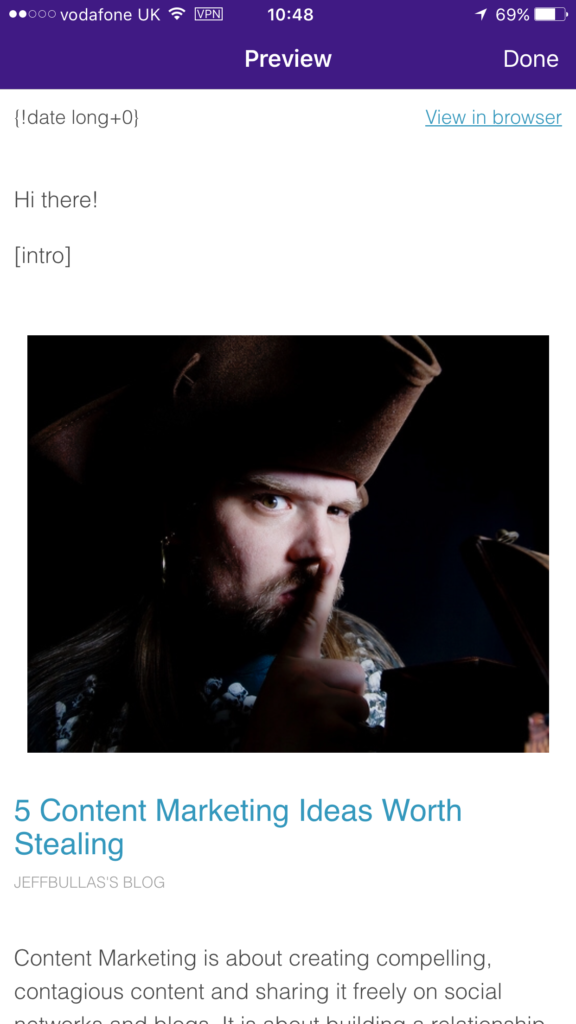 Previewing your newsletter in Curate.

Pop a few more articles in there. Write the intro, and you’re ready to send. Job done!

But it’s not powerful enough for serious newsletter publishers

Curate is very limited. You have one format. You have to produce everything on your iPhone. There is no OS X version. And the same or similar functionality isn’t available via the AWeber.com website.

I can see why AWeber went down the route they have. With Curate they’ve opened newsletter publishing up to a whole new set of people. People who may not have the time or the confidence in their writing to produce a newsletter.

Oh, and they’re a new set of people who may subscribe to AWeber’s e-mail marketing service 😉

When does curation equal spam?

As it stands, the app encourages you to just pop the articles in to the newsletter, and leave it at that. Although, I must emphasise that you can write and edit the content and even use Markdown formatting.

But I don’t know about you. If I received an e-mail newsletter containing just lifted content, I’d be disappointed at best.

Adding value to your newsletter

I believe strongly that you need to bring extra value to every interaction with customers – and potential customers. If I don’t always meet that lofty level, at least I’m determined to try.

In the case of The Week in Writing For SEO, that means not only selecting stories. I also explain why they’re important and summarise the important take-aways.

That’s quite a bit of work. Work that I don’t want to be doing even on my Plus-sized iPhone 6S. It’s fine for firing off a Tweet or quick email, but as a typing machine, it just isn’t what I want to use.

But, being away for a couple of weeks last month, I found I had to use Curate to put the newsletter together. I shan’t go through the long, complicated, and ultimately boring story of why I didn’t use my laptop.

Yep. I struggled with the writing and editing as expected. But the basic assembling of the content worked like a dream. I also realised the way I should use the Curate app.

Here’s an overview of what I do. 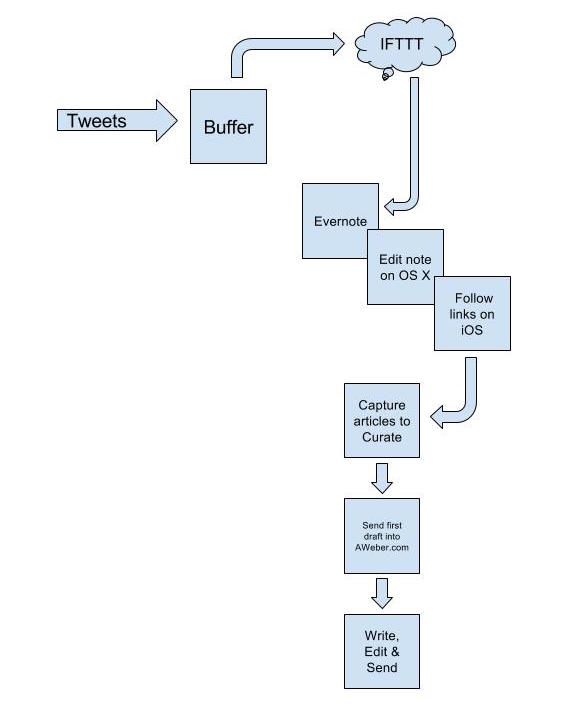 I Tweet on @writingforseo. I use Buffer to post at intervals, 24 hours a day. Buffer is one of those wonderful tools that is easy to use, yet powerful.

I subscribe to the Awesome package for $10 a month. It lets me queue up to 200 Tweets at a time in a number of social media accounts. There’s a free account too, but it’s too limited for my purposes. (If you’re interested in the precise package details, please have a look a the Buffer site).

All I have to do is make sure the queue is topped up.

While I could use the iPhone to add articles to Curate as I find them, it’s a constant distraction throughout the week. Instead, I found an easy way to compile a list of what I’ve actually Tweeted. I used an IFTTT recipe to add each Tweet that ends up in my Buffer queue to a Note in Evernote.

I write the newsletter every Wednesday morning for publication Thursday. I start by pulling up the Note in the Evernote app on my Mac. Then I find the first occurrence of the date seven days before the publication date. My newsletter candidates are between there and the end of the note.

I scan through and mark those Tweets I want to consider for the newsletter. I generally mark two or three more than I actually need.

Now over to the iPhone, where I open the Note in the iOS Evernote app. I find the first marked Tweet and click on the link. I then add the article to the newsletter. At this stage, I’ll naturally cut the number of articles to 5 or 6 so there’s only one or two that needs to be dropped. I always use the same number of articles each week so the reader doesn’t feel shortchanged.

When I run Curate I see the newsletter with images, headline and my intro paragraph marker. Sometimes Curate fails to pick up an image, so that’s good reason to drop the story, if you’re in a hurry.

AWeber sees this newsletter as good to go, and some people are sending sending minimal newsletters. But I want to write some of my copy, and sometimes re-write the headlines.

And that’s where we came in. I don’t want to write and polish copy on the iPhone. I don’t have the patience.

This is the core of all this. The step that makes everything else possible.

As far as I can see, the Curate app only allows you to send a newsletter once, to a single list. I have multiple lists. And I don’t want to send the proto-newsletter as it stands on my iPhone.

The simple format from Curate is retained. I like it because I want a newsletter that will work with many e-mail clients and the web. I refuse to add another testing and bug-squashing stage to my workflow.

Another great thing is that I’ve so far not managed to break the formatting while I’ve been editing. That’s a great plus!

Next, move the first draft from the Dummy list’s Broadcast section to Draft section of your main (or only) newsletter list.

Click on the Newsletter’s Subject Line (the blue link) and you can write and edit the newsletter quickly and easily. 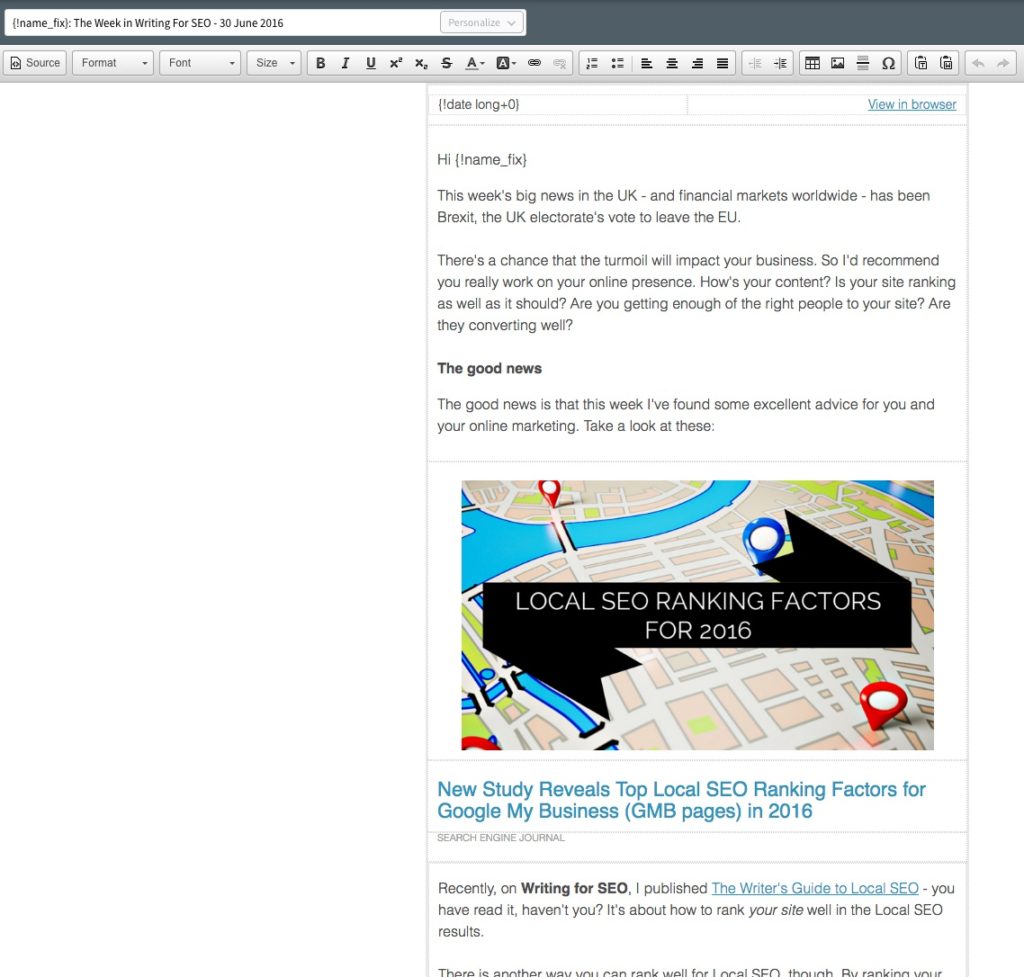 Once you’re content with your newsletter (use the Preview and Test button), you can either send or schedule it. I like to have The Week in Writing For SEO finished on Wednesday morning, so I can leave it 24 hours before a last read through. I then schedule sending for 1pm London time.

Er, Dave. All you’ve done is add another stage to your workflow

Well, I have, but that’s not the point. That extra stage saves so much time and irritation later.

As you’ve seen, the Curate app grabs all the images for you and puts them in place in the newsletter automatically. The post’s headline is put in place and made a live link automatically. As is the attribution to the original site. Space is made for the lifted first paragraph, and is flexible enough to accommodate your own copy.

Want to try this easy way to publish your curated newsletter? Nip over to AWeber and sign up for a free trial.

Have you been experimenting with AWeber Curate? Have you developed any hacks? Have you even found a more efficient workflow than mine? I’d love to hear.

This website uses cookies to improve your experience. We'll assume you're ok with this, but you can opt-out if you wish.Accept Read More

This website uses cookies to improve your experience while you navigate through the website. Out of these, the cookies that are categorized as necessary are stored on your browser as they are essential for the working of basic functionalities of the website. We also use third-party cookies that help us analyze and understand how you use this website. These cookies will be stored in your browser only with your consent. You also have the option to opt-out of these cookies. But opting out of some of these cookies may affect your browsing experience.
Necessary Always Enabled
Necessary cookies are absolutely essential for the website to function properly. This category only includes cookies that ensures basic functionalities and security features of the website. These cookies do not store any personal information.
Non-necessary
Any cookies that may not be particularly necessary for the website to function and is used specifically to collect user personal data via analytics, ads, other embedded contents are termed as non-necessary cookies. It is mandatory to procure user consent prior to running these cookies on your website.
SAVE & ACCEPT